Getting the ship unstuck

I don’t know if you followed the drama of the container ship that got stuck in the Suez Canal last week. It weighed around 220,000 tons. To give you an idea of how heavy that is, how much do you think an African elephant weighs? 6 tons. So the ships around 36,500 elephants heavy.

But it got stuck. In a really bad place. Like really bad. The Suez Canal is a major shipping artery of the world and they estimate it was holding up around $9.6bn of global trade every day it was blocked.

To get the ship free they needed to dislodge it.

To do that needed a serious amount of power. They got some of the biggest baddest tug boats in the world, some pulling, some pushing, some huge cutter suction dredgers, excavators on the shore digging out the nose that got stuck…

And then finally, what really helped was the moon. A big tide raised the sea levels to a significant height which ultimately helped the ship float free.

Interestingly people around the world seemed to find in the picture of that stuck ship, a picture of their own lives.

This meme is a funny example of that. 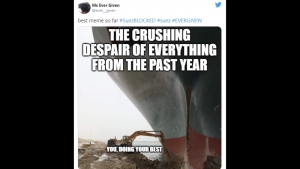 When the ship was set free the internet exploded with celebration. Somehow this was something to get really excited about. A container ship thousands of kilometres away, had somehow become a magnet for people’s emotions.

Maybe those meme’s weren’t just funny maybe they were telling us something about how we’re feeling at this time, with the pandemic, the environmental crisis, the uncertainty of employment, the mounting protests and house prices, the rise in mental illness, pressure upon pressure.

As a global village we seem stuck: desperate for hope and desperate for peace. But unable, despite our best efforts, to find it. And even if we do it only lasts as long as a news story. The container ship is freed but then the next thing we hear is about a mass shooting or some new war or about a friend who’s just been diagnosed with cancer or who’s lost their job. And our hope and our peace evaporates.

It’s like our global village is like the ship waiting for some power to come and free it from this broken cycle of hope and hope lost. It’s like we know that we could be so much more, we sense our potential, we see it in our art, the brilliance of our science and music, in the infinite beauty of kindness, we sense it in our kids, the wonder of these incredible lives… What could be? What could be?

And then, reality. Arguments, jealousies, greed, selfishness, sickness, boredom, disappointment that threatens every relationship and every great idea.

This, it seems, is our lot. Stuck. So much potential. Yet stuck.

These two women were friends and followers of Jesus. Before Jesus was crucified they had witnessed Jesus do some incredible things. It seemed that everywhere that Jesus went people got unstuck.

People that were stuck in sickness, were healed.

People that were stuck, trapped by demons were delivered. In fact one of these women, Mary had had seven demons driven from her and her life completely changed! No wonder she loved Jesus!

People that were stuck with no where to find food, were miraculously fed.

People that were fearing for their lives in terrible storms, well, Jesus stilled the storm with one word.

People that were cursed and rejected by society he saw and had compassion on and healed. Prostitutes, drunks, thieves, it didn’t matter, he welcomed them, ate with them, loved them and introduced them to God and their lives were transformed.

And more and more people followed Jesus because who doesn’t want to be where goodness and healing and love rule?

Who is this man?

Through it all one question hovered in the air constantly, Who is this man? Theories ran around all over the place. Jesus had become quite the celebrity. Everyone it seemed had an opinion. Prophet, crazy man, teacher,

But Jesus had enemies too. They hated his popularity and they felt threatened by the freedom he offered to people. So they had him nailed to a cross and killed.

And when he died all those hopes about who he was died to. God’s rescuer, the one who makes us and the world unstuck, that hope died. And the enemies of Jesus rejoiced.

With Jesus’ death, hope for change, hope for healing, hope for freedom from demons and despair, hope that God might be working to heal his world, had died too. The world was stuck again, it seemed.

That was how his followers, those women, felt on the Friday that he died, and the Saturday. But then Sunday morning came…and they walked to the tomb and found it empty.

And then a little while later, as the story goes, they met Jesus himself. He’s different. They don’t recognise him straight away. He hasn’t simply been resuscitated. He was in the tomb for over 36 hours. But neither is his body the same as it was before he died. He can now walk through walls. But his scars are still visible and he still eats things like fish. It’s like his body is his but it’s new. He’s resurrected.

What could this mean? Who is this resurrected man?

It took his early followers them a while trying to figure it all out. It was all so unexpected.

As they thought long and hard about Jesus about what he did and said, particularly his death and his resurrection they came to a stunning conclusion.

Jesus wasn’t any ordinary man. He wasn’t mad. He wasn’t a liar. He was, as incredible as this sounded, who he said he was. He was God come close as a man.

The reason they knew that this was this so  wasbecause he’d been raised from the dead by a power far more powerful than what it took to move a container ship. God’s power.

Faith came and the fear went

In the days and weeks following Jesus’ resurrection the women and men who followed Jesus changed. Faith came and the fear and confusion went.

Nothing frees us to truly live lives of love like the hope of resurrection.

As Tim Keller writes, ‘Why is it so hard to do the right thing if you know it’s going to cost your money, reputation, maybe even your life? Why is it so hard to face your own death or the death of loved ones? It’s so hard because we think this broken world is the only world we’re ever going to have… But if Jesus is risen, then your future is so much more beautiful, and so much more certain, than that.’

Resurrection frees us from the fear of death. Death was not the end. For followers of Jesus there is another life to come.

Not only that, Jesus had told them that he would one day return and set the whole world right by the same power that had raised him from the dead.

In the same way that his dead body had been resurrected to new life so all creation would be restored to new. That’s why we have those eggs, right? New life has hatched!

Followers of Jesus no longer did funerals like the culture around them. They mourned but they celebrated too!

But followers of Jesus didn’t live that way. When plagues came historians recorded that everyone else fled but the followers of Jesus stayed and cared for the sick and gave their lives freely. They weren’t trying to save their own lives, they gave them away for the sake of others. They did it because they were convinced anyone who believes in Jesus would have life, after life.

Don’t you long to be free from the anxiety that this FOMO has generated in our culture? We can. We can trust Jesus with our future, here and after death. He is the resurrected Lord of both.

This morning, that hope and freedom is available to us. Right here. Right now.

If you don’t carry this hope can I invite you this morning to make this hope your hope.

How do we do experience this?

Just like these women, we need to let the news of the resurrection of Jesus change our understanding of who Jesus is.

He’s not just a dead teacher or religious guru. He’s alive and God has raised him up to show us that Jesus himself is Lord of all creation and each person. If this is all new for you. No problem. As I said, it took his friends a while after meeting him resurrected to really settle on what all this meant for how they related to him.

But in the end they concluded that he was God and they would give their lives to him to follow him. And live in his power and love.

What he invites us to do is to open our hearts to him. Begin to talk to him and welcome him in. He says he wants to have a meal with us. Conversation with Jesus is best when it’s real. We just talk to him in our hearts as honestly as we can. We invite him into our troubles, our mess, our emptiness and ask him to bring his resurrection life into all those places.

Listen to this Easter Sunday message

Tagged in
Easter Sunday Ever Given Stuck ship
Share